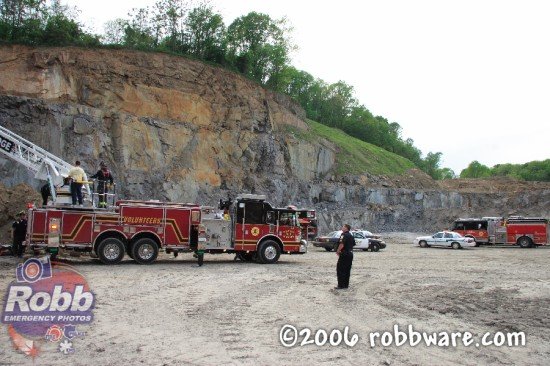 Less than 10 minutes after the Engine returned from Engine Company Class. The Qrs was dispatched to the quarry for a reported fall with trauma. Upon arrival of Qrs 63, Captain Gary Plotts (6312A) realized the 13 year old patient had fallen some 70 feet down a cliff in the quarry, he then requested both companies be dispatched for the below-grade rescue. Rescue 63 arrived under the command of Chief D. Evans Jr (639). The 10 member crew that were on the Rescue then began to deploy all of the rope rescue equipment and stokes basket for extrication of the patient of off the cliff. Chief Evans special called Medic 817 out of the City of Chester so that Paramedic and Experienced Rope Rescue Technician Mike Porter could assist at the scene. Medic Porter then scaled the cliff while Truck 63 set up the main so that the EMS personnel could assess the patient. The crews then strapped the patient into the stokes basket so that he and Medic Porter could begin the long repel down. The patient was transported to CCMC. Crews operated on the scene for over 2 hours for set up and extrication of the victim. Everyone on scene put forth a tremendous team effort to get the job done but special recognition goes out to PM Porter, Rescue Techs M. Evans, K. Dawson, D. Durbano Thanks to Robb Ware for the Pictures.