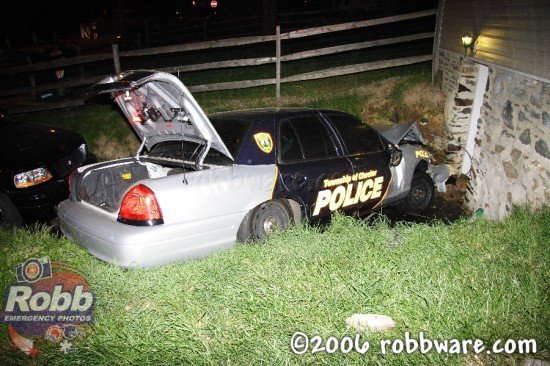 At 11pm Rescue Company 63 and Rescue and Ambulance Company 72 were being dispatched to Dutton Mills Rd and Mercer Place for an accident involving a police car. One car was reported to be on fire after it struck a home and one with entrapment. Chief D. Evans (639) arrived and confirmed he had one trapped police officer and another cruiser vs a dwelling. Rescue 63 crew placed a hand line in service and knocked down hot spots in the engine compartment.  The Rescue crew also began stabilization and extrication while Chief Evans requested 3 more ambulance’s to the scene to assist. Due to the high volume of police activity Chief Evans staged the rest of the assignment a block away. The scene was declared safe and a few units remained on scene for the traffic accident crew.  The company remained on the scene to assist the police with lights for 3 hours.    Thanks Robb for the pictures.